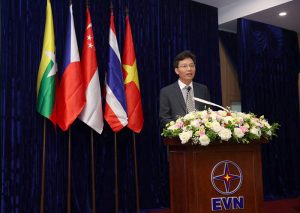 Mr. Mai Quoc Hoi – Member of EVN’s Board of Directors gave opening remarks in the Conference

Speaking at the opening of the Conference, Mr. Mai Quoc Hoi said that the internal audit system of EVN has been established since 1995. Over the past years, along with the strong development of the power system, EVN has step by step improved its governance capacity, with the aim of becoming a strong economic group with advanced management approaches. Especially, in the last 5 years, EVN’s internal audit system has changed drastically, via changes in models, improvements of legal frameworks and capability. 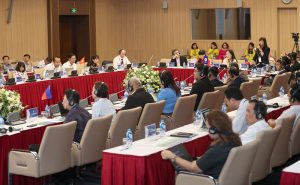 In order to realize the goal of developing an internal audit system in accordance with international standards, along with its owned efforts, EVN has been aware that that learning experiences from power utilities those having developed internal audit systems is extremely important.

“This HAPUA conference is an opportunity for the power sector in ASEAN countries to exchange and share knowledge, skills and experience in the field of internal auditing, contributing more effectively to the development of the power sector in each country ”- Mr. Mai Quoc Hoi emphasized.

The delegates took souvenir photos at the headquarters of Vietnam Electricity

Affirming that EVN is currently one of the leading state corporations in terms of system governance, Ms. Le Thi Tuyet Nhung expressed her expectation that EVN will become an outstanding organization in internal audit in the next time.

Taking place in 2 days (June 20 – 21), there were totally 13 presentations from participants in the 3rd HAPUA Conference on internal audit. 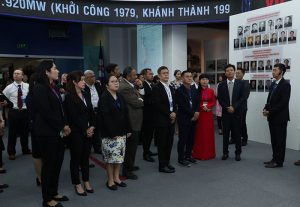 In the framework of the Conference, before the opening ceremony, delegates visited the Traditional House of Vietnam Power Sector at the headquarters of Vietnam Electricity.